When one considers the whole London airport system it is more than evident that our nation’s capital has the busiest and largest traffic stats in terms of air fair in the world. This is not surprising bearing in mind the simple fact that London is a global leader in a number of respects, including but not limited to:

But what is the case with individual airports? Which are the busiest air-fare hubs in terms of number of passengers that have been serviced in the past year? Let’s have a look at what the statistics have to tell us.

Located to the south of the city centre of Atlanta in the state of Georgia, the Hartsfield–Jackson Atlanta International Airport serviced 101,491,106 passengers in last year alone. Delta Air Lines, Delta Connection, and Delta Air Lines partner, ExpressJet and low-cost carriers Frontier Airlines, Southwest Airlines, and Spirit Airlines all use this airport as their main hub. Bearing in mind the fact that those are some of the largest airline companies in the US, those number are easy to explain. Over a thousand flights take off or touch down on the Hartsfield-Jackson Atlanta International Airport on a daily basis.

This is the main airport in China’s capital and 89,938,628 passengers used it last year alone. The newest, third capital of the airport was built in 2008 in preparation for the 2008 Olympic Games, which kind of made the whole facility a bit more efficient, so there is no longer so much chaos. According to the official statistics that are released by the authorities here, the airport services well over half a million flights on an annual basis. It is very well connected to metropolitan Beijing via rail, buses and taxis, and it is also used as a vital transport hub to and from countries in the Far East. An interesting fact is that in 2009 the Beijing Capital International Airport was ranked 1st on the ranking of the World’s Best Airport by Condé Nast Traveler magazine, based on its satisfaction survey.

The Dubai International Airport, the main transport hub in the United Arab Emirates, served 78,014,841 passengers in 2015, making it the third busiest airport in the world for that year. In addition to the number of passengers that it service, the Dubai International Airport is a vital hub for cargo transportation and according to several statistics, it is the sixth busiest airport in the world in that respect. 7 700 weekly flights operated by as many as 140 airlines to 270 destinations across the globe – not many airports can compete with the sheer prowess demonstrated by the Dubai International Airport. The airport plays an important part of the economy of the Emirates not only because of the passengers and cargo that go through there every year, but also thanks to the fact that there are 400 000 jobs that are provided by different branches of the institution and affiliated businesses – that is 21% of the employment in Dubai, and accounts for 27 per cent of the gross GDP of the country – 26.7 billion USD. Sounds impressive, doesn’t it? That’s because it truly is.

Another very important and respectively quite busy international airport on the territory of the United States is the Chicago O’Hare International Airport. 76,942,493 people go through the gates of the O’Hare airport on an yearly basis, according to the statistics that are available from 2015. The whole airport complex was constructed in the period of the World War II. It was conceived as a part of the manufacturing plant of the Douglas C-54s. Once the war years were over, the Chicago O’Hare grew out to be a passenger airport and one of the busiest in the world for that matter. Two separate sources list Chicago O’Hare as the best airport in terms of customer satisfaction in North America for many years – Readers of the U.S. Edition of Business Traveler Magazine (1998–2003) and Global Traveler Magazine (2004–2007). Top domestic destinations from here are New York, Los Angeles, San Francisco, Dallas, Minneapolis and Atlanta, while the top international destinations include airports such as London, Tokyo, Frankfurt, Toronto, Mexico City and Cancun (again, Mexico). The airport is connected to the metropolitan area of Chicago via the Chicago L, Metra, the Airport Express, Bus lines and taxis. 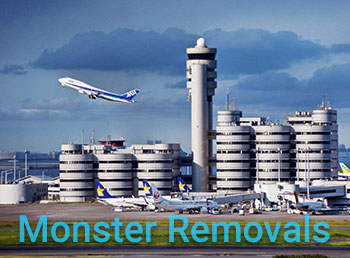 The Haneda Airport is the busiest airport and the main air-fair hub in Japan’s capital Tokyo. Last year it serviced the impressive number of 75,316,718 passengers, which is actually less than the previous year – which resulted in Haneda Airport going down in the ranking with one slot, making it the fifth busiest international airport in the world. Haneda is the main base for two of Japan’s main domestic airlines – Japan Airlines (housed in Terminal 1) and All Nipon Airways (that use Terminal 2). Hendon is located in the district of Ota, which is located some 14 kilometers to the south of Tokyo Station. Throughout its history Haneda traditionally handled all domestic flights to and from Tokyo, as well as the majority of the international charters. The Haneda Airfield was first opened during the Imperial age of Japan, in 1931 and was later expanded throughout the years of the American occupation following World War II. There are three main terminals here – Terminal 1 and Terminal 2, as we have already mentioned, work for the domestic lines at the Haneda Airport, while the third one, conveniently named International Terminal, handles the international flights. It was first opened in 2010. All Nippon Airways (Star Alliance), Japan Airlines (oneworld) and Cathay Pacific Airways (oneworld) operate the lounges in this terminal. SkyTeam also uses it for its flights to and from Tokyo.